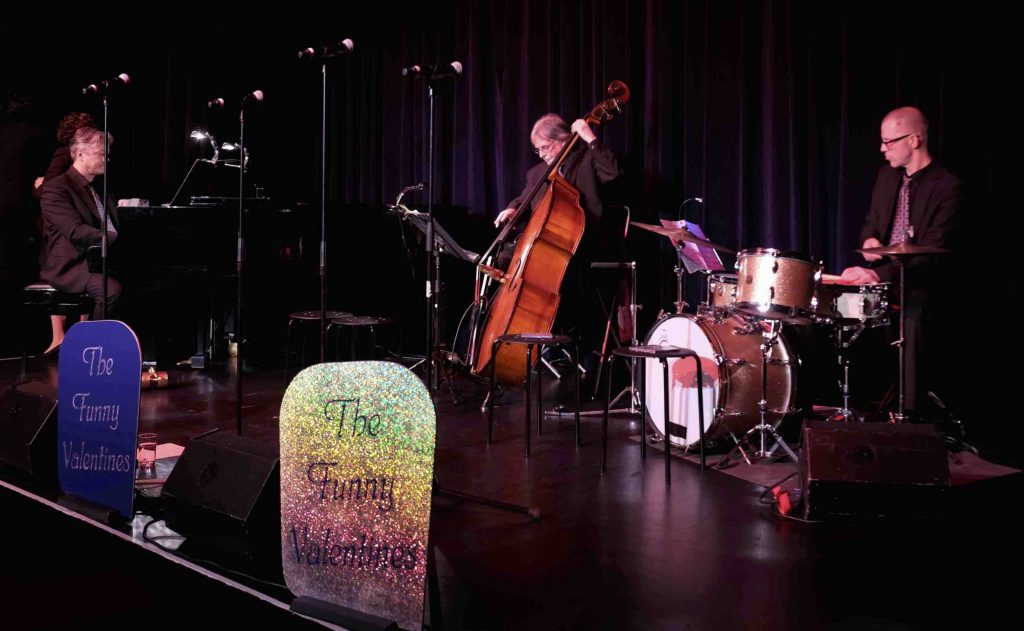 Eric, our beloved bass player and friend of many years, passed away on September 3, 2022.
May he rest in peace – or set the jazz heaven on fire.

Even as a child, the native Englishman (born in Cornwall in 1941) played piano and trombone. For many years he toured as a pro through different clubs in England, Northern England and South Africa with a trio accompanying musicians like Tom Jones and Roy Orbison. In 1974 he came to Munich and got to know the local music scene. He toured with Udo Jürgens until he finally joined the Hugo Strasser orchestra from 1979‑2016.

Besides having played for many studio recordings he works as a composer and arranger for Bob Ross („Blechschaden“), Jennifer Rush and Joan Orleans, just to name a few. He also accompanies artists like Jenny Evans, Roberto Blanco, Gerry Hayes and Max Greger AND – last but not least – The Funny Valentines.

The drummer (born in Heidelberg) works with several big bands as well as jazz and soul groups, mostly in the Southern German area but also abroad in France, Italy, Switzerland and Austria. He has contributed to various CD and radio productions. He works as a music teacher and workshop leader.

The jazz pianist and arranger Peter Wegele, whom the Süddeutsche Zeitung praised as being one of the most creative pianists in the Munich area (Jörg Konrad), studied at the Graz conservatory and attended seminars by Ray Brown, Joe Pass, Wynton Marsalis, Bob Brookmeyer, Chuck Israels, Barry Harris, Clark Terry, Bill Dobbins and others.

Besides playing several hundreds of concerts, TV and radio shows Peter Wegele has been pianist and arranger for recordings with Philipp Weiss (Bennett Studios New York), Nizza Thobi (Jerusalem/Munich), Thomas Bendzko Bigband, Dox Octet (Jazz), The Funny Valentines (Vocal Jazz Quartet), Posterity (Jazz), Darja Svajger (Chanson), Liz Howard (Gospel), just to name a few.
Hans Albers revue with the actor Tommi Piper. Chanson program with Loretta Stern. Composer for the award-winning film „The Secret Behind“ and first prize at the Benelux Song Award for the jazz song „Taxi“, together with Philipp Weiss. Signature tune for the Spanish TV channel EiTB. In June 2007 CD recording with Annedore Wienert at the RTS Studios in Maribor/Slovenia (Necessarily Two).
In cooperation with Florian Moser composer and arranger for several musicals and cine films as well as the remake of the opener for the TV series „Marienhof“. Since 2009 lectures on film music at various universities.
Arranger of the inaugural hymn of the WCG in Cologne. In 2009 on tour with Charles M. Huber (musical Mandela), in 2010 arranger of the suite „Lippls Traum“ for the film festival in Munich.